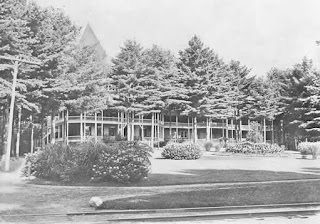 In a clipping found from November 1899 considerable changes were made to the Adirondack Inn. Information follows:

The Management of the FJ &G RR has decided to spend several thousand dollars in making further improvements at Sacandaga Park and contracts have been awarded for alterations and additions to the hotel which when completed will make a modern structure with all the comforts and conveniences of an up-to date summer resort building.

The changes are necessitated by the increasing popularity of the park and the need for more accommodations for people desiring to remain at the resort. 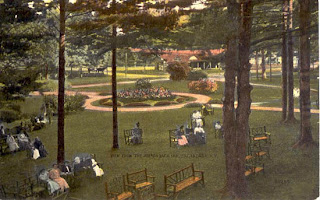 On several occasions last year the resort was crowded to overflowing and the new arrangements will give the hotel numerous additional bed rooms and also a very large dining room.

The changes provide for a large bar,40 x 20, in the southeast corner of the basement, with an outside entrance on the corner.
Large lavatories will also be constructed in the back of the bar; also a barber shop and adjoining billiard room. These will be located in the south west end of the building under the present dining room.

The latter room will be large enough for three billiard tables and a large spacious stairway will lead to the floors above it. An areaway is to be constructed under the present porch which will give a sub- piazza 100 feet long and 10 feet wide.
All the rooms will be finished in North Carolina pine and the whole south side will be practically cut for out for windows to give plenty of light in the basement.

The present dining room, which will accommodate about 100 people, will be enlarged to accommodate over 200 people by taking in the rooms where the barbershop and kitchen are now located and also by building an extension on the northwest comer of about 20 x 30 feet. Those changes would then give the hotel a dining room of about 44 x 66 feet. A Georgia pine floor will be placed in the room which will also be used for a ballroom for the regular weekly hops.

The dining room will be divided in the center by draperies so that the permanent boarders will not be interfered with by the excursionists; and the latter also receive better service.
A large extension will be made ion the west end of the building in the rear of the dining room with dimensions of 34 x 38 feet one story high which will be utilized for kitchen pantry pastry kitchen storeroom and servants dining room. The current bar room will be converted into bedrooms or card rooms.

A large two story piazza 20 x 40 is to be added to the present piazza on the north end, which access is only afforded from the hotel. All other approaches to the hotel are to be removed except the main one in the front.

The large piazza will be added not only for the pleasure of the guests , but enable the bands to give their regular concerts in unpleasant weather. The stairway leading from the office to the bar and billiard rooms will be located at the right hand of the entrance to the present reading room.

Two large French doors will be placed in the present parlor to enable guests to go onto the piazza without passing through the office.

By utilizing all the space on the second third and forth floors about twelve additional bedrooms will be secured. Three modern private bathrooms will also be connected with some of the most desirable rooms in the hotel. The stairway leading from the third to the fourth floor will be changed to a square stairway, similar to that leading from the office to the second and third floors.
There will also be additional windows throughout and much additional closet space.

The floors in the basement will also be deadened so that there is no objectionable noise.
Each room of the hotel will be provided with rope fire escapes and there will be a standpipe with a coil of hose for fire fighting purposes on each floor of the hotel. Water will be obtainable on each floor.

A small building will be constructed at the rear of the hotel for use as laundry, this being done to remove the great danger from fire, and removal of the kitchen from the main building will make several of the rooms much more desirable.

A modern bowing alley will be constructed in the rear of the building for the use of guests, cottagers, and visitors to the park. The contract for the work being done has been awarded to PM Simmons of Johnstown for $5000.00 and the plumbing work and other matters will bring the total mount expended to about $6000.00
The plans for alterations to the hotel and new buildings were prepared by Architect FL Comstock of Gloversville. Columnists note: Removal of the kitchen and laundry would reduce the possibly of fires in regard to wood stoves being used to heat water for washing clothing and heating irons for the pressing of shirts etc.